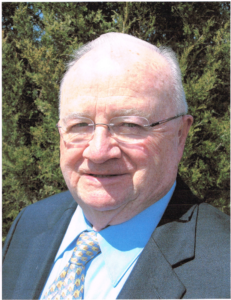 Charley Huck, the longtime HomeSharing board member who died April 25 at the age of 87, was a remarkable man. He lived a life full of kindness, wisdom, creativity and dignity and he possessed integrity, insight, tolerance and empathy second to none. Everywhere he went in life he planted the seeds of grace. There was no greater believer in HomeSharing’s mission and no more devoted contributor of his boundless energy and talents.

Charley died too young. He had more energy and spunk than people a quarter of his age. He grew up on a farm in Hunterdon County, but he went to Phillips Exeter Academy in New Hampshire and Cornell University. Though he was casually elegant and elegantly casual, Charley had no trace of preppie pretension or Ivy League arrogance. He always looked like he had just come from drinks on the yacht with Fred Astaire, but was ready to play horseshoes behind the barn. He was one of the few grown men who could wear a bowtie and not draw any snickers. Literally and figuratively, he was comfortable in his own clothes and that was why others in his presence were just as comfortable as he was.

Charley was literally a man of infinite talents. A renowned industrial designer, his team at HuckDesign received national honors for a design of a critical care hospital bed. Charley remained active in his profession until his passing. Out of work, he was an accomplished pianist who performed with Marshall’s Dixieland Band who brought joy throughout Central Jersey and energized every HomeSharing social event. Charley’s love of life was contagious. Anyone who met him could instantly sense his boundless and youthful enthusiasm for the art of living a good life. He approached the pursuit of happiness with the same precision and imagination he brought to his work. You could not help but be inspired by his shining optimism and bottomless faith that in the long run, if we all treated each other with respect and tolerance, everything was going to be all right.

HomeSharing was not the only beneficiary of Charley’s generosity. Without a selfish bone in his body, he was devout in his duty to the community. He served two terms on the Tewksbury Board of Education. He was on the board of the Arc of Somerset County and he served on The Midland School’s board of trustees for 36 years. You could always depend on Charley to lend a helping hand or share his wisdom if a problem needed to be solved. His good humor was a soothing balm whenever you were discouraged. His compassion and caring for others were endless. In short, he was a gentle man and a gentleman.

Many tears were shed at HomeSharing when we learned of Charley’s passing. But he would not want us to cry. He would be overjoyed if we reacted with his characteristic sangfroid and dedicated ourselves to following his lead in helping our neighbors. We should commit ourselves to nurturing his seeds of grace and making our corner of the world a better place.

We at HomeSharing send our heartfelt condolences to his loving wife of 26 years, Jane, his daughter, Susan Huck of Somerville, and his step-children, Douglas Young of Bridgewater and Stephanie Young, currently serving in the Peace Corps in Ukraine.